Always Do What Scares You - Bloghop and Giveaway 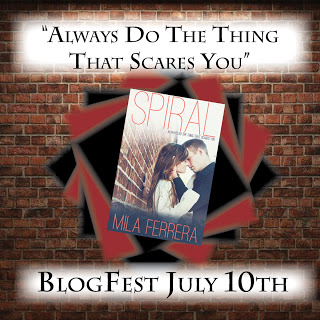 To celebrate the release of her New Adult novel, Mila Ferrera is doing a blogfest today. In SPIRAL, Nessa confronts her fears about getting close to Aron by reminding herself of her father's motto: "Always do the thing that scares you." It's probably a saying all of us could use from time to time, so for this blogfest, post about a time that you decided to do something even though it scared you, either to get over that fear or because you knew it would be good for you."

Once I got to college, I wanted to have a boyfriend. I developed a crush on a guy and over winter break, he asked me out (over AIM, how romantic!) Of course I said yes. But I was terrified. I had never dated before. What if I clammed up and said nothing? What if he farted? Or I did? LOL I wasn't too worried about the farting, but it did cross my mind. I didn't know what to expect - the whole fear of the unknown.

Our first actual date was to see a movie (The Two Towers). Wasn't to bad. Kept dating the guy for a few years. Ended up marrying him.

So I never really entered the dating game for that long. Only dated one guy. Only ever kissed on guy.

How about you? Do you face a fear during college?

Nessa Cavanaugh, psychology student, knows how to stay on an even keel. Despite the urging of her mother and her academic advisor to get a life and have some fun, “all work and no play” sums up her plan to survive her grueling internship year at a children's hospital. She doesn't want to end up like her father, whose constant ups and downs broke her family, and avoiding unnecessary emotional entanglements is a must.

Then she (literally) runs into Dr. Aron Lindstrom in the middle of her disastrous first day on the job. The attraction is instant—and terrifying. Nessa knows she should stay away—especially when she finds out he has a reputation for being a player—but Aron is brilliant, intense, and as sexy as they come. When he challenges her to take a chance on him, her plans to stay focused on work start to crumble.

But what begins as passion takes on a dangerous edge, becoming an emotional roller coaster that’s frighteningly familiar. As things spiral out of control, Nessa must decide whether she should hold on for the ride or run … even if it means leaving her heart behind.
Posted by Nicole Zoltack at 10:30 AM

Nicole, heck with the dating - that is just awesome.

Hahahaha--"what if he farted?" Well, my guess is you're over that at this point! Hilarious, Nicole, and thanks for entering the blogfest!

Got it right on the first scary try. Awesome :)

That is so sweet! You took that chance despite your fear and you're still together. I joined the dating scene when I was about 18, however, I did have a HUGE crush a boy who lived a few doors down. One evening a friend and I got locked out of my house, so I ended up knocking on his door and sheepishly asking for a coat hanger so I could break in... (that was scary)

Aww, how sweet!! My hubster is the only one I kissed or dated too. And he also asked me out over AIM. Do people even use AIM anymore?!? I used to be on that thing ALL the time