Pure Textuality PR is giving away a brand new Lenovo Ideapad 110s laptop. With an 11.6" screen, weighing less than 3 pounds, and less than an inch thick, it's the perfect little machine for any writer on the go. The system specs meet the requirements for many popular writing programs, including Scrivener., accesses Google Docs with no problem, AND it comes with a free 1-year subscription to Microsoft's Office 365.
ALL YOU HAVE TO DO TO ENTER IS SIGN UP FOR THE PURE TEXTUALITY PR AUTHOR MAILING LIST.

Can the Magic be Awakened? New #UF and #PNR boxed set!

The secrets of the heart are hidden when magic sleeps, but miracles happen when magic is awakened.
Enjoy eleven stunningly romantic supernatural tales in one divine boxed set. Fantastic beasts, shifters, and unearthly creatures face all too human conflicts and heartbreak, but always with a promise of a happily-ever-after ending.
With mates and magic, each story brings to life a unique world where anything is possible, including finding true and everlasting love, no matter who…or what you are.
Only 99 cents or free with KU! 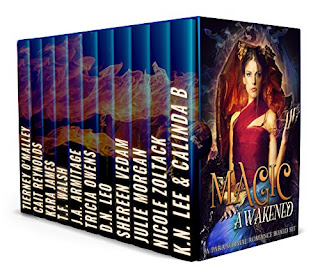 K.N. Lee & Calinda B
Urban Extinction
Two women. Two extraordinary magic abilities. One city threatened by dark supernatural forces.
Nicole Zoltack
Of Howling Moons
The dark world beneath the moon where werewolves reign is no place for a human or a lone wolf.
Julie Morgan
The Power Here
An Oni looking for a second chance at love. A were-panther wanting revenge. A banshee fighting to keep their triad protected.
Shereen Vedam
Hidden
In a realm where magic is banned, an extraordinary woman braves her secrets being revealed to defeat a sorcerer bent on destroying her world.
D.N. Leo
Pisces – Silver Blood Collection
The queen of the deep sea falls in love with a human spy. But for him to be with her, she has to kill him.
Tricia Owens
A Hex on You
As a dragon sorceress, Anne Moody couldn’t care less that the magickal community fears her. She’s unprepared, though, for the creativity of their attacks.
J.A. Armitage
Endless Winter.
Imagine falling in love for the first time. Now imagine being told you had to have a baby with somebody else…
T.F. Walsh
Lunar Shadows
A powerful seer. A Guardian with a death sentence. A fight to stay alive.
Kara James
Cornered
A dragon shifter MMA fighter meets his match in a witchy cop. Could she unlock his lost memories and why he awoke covered in blood?
Cait Reynolds
Seeds of Love
In a world of shadows and death where nothing grows, can there be any hope for ‘The Seeds of Love’?
Tierney O’Malley
Wolf’s Heart
When a shapeshifter and a human dreamer finally meet, their worlds clash. But would they find love in the middle of chaos.
Posted by Nicole Zoltack at 6:30 AM 1 comment: