5 Reasons Why Love is Better in Books

Oddly enough when I set out to write my first novel, Unforeseen, I didn’t intend for it to be a romance, paranormal or any other sort. I wanted to tell the tale of an unlikely heroine tossed into a world where she was seemingly the smallest and weakest member, and then show how she scratched, fought, and crawled her way to the top. Her falling in love with a handsome and charming vampire just sort of happened along the way.

At first I was a little thrown by the idea my novel was categorized under paranormal romance. Single and still a bit tomboyish, I’m not exactly the poster child for romance authors (I’ll leave that to J. R. Ward). That’s not to say, though, that I don’t love a good torrid tale. Actually, the more I thought about what I’ve enjoyed reading over the last few years, the more I accepted the fact that maybe I was in fact a romance reader and writer. I’m okay with that now, because as every single woman (and most married women) knows—boys in books are just better!

*I apologize in advance to the guys for my blatant use of gender stereotypes in an attempt at a little humor for the ladies!

5 Reasons Why Love is Better in Books

1. Dating doesn’t exist. When was the last time you read a book where the woman had to suffer through those awkward first dates or the “when can I change my Facebook status” dilemma? Love in romance novels, particularly paranormal romance novels, happens fast. Often the main characters have their clothes off before we’ve even learned their full names.

2. The guys are always jaw-droppingly hot. Apparently blemishes, bald spots, and beer guts (all of which we grow to love on our real-life beaus) don’t exist in the land of fiction. It’s all six-packs, all the time. Of course, this could have something to do with the fact that our imaginations are at least partly creating the images of these Adonises, so they are always just to our individual liking.

3. Danger is steamy when a happy ending is almost always guaranteed. In real life if a tall dark stranger popped out of an alley and came at me, I’d wet my pants and hope to hell my years of karate kicked in. There would be no forgiving, never mind falling for the guy. In romance novels, however, this scenario, with some variation, occurs all the time and usually ends in a love scene that leaves the reader begging to by mugged.

4. Narrators can tell us what real men won’t—what they’re thinking and, more importantly, feeling. Boys and books can be just as hard for their female partners to read as those in reality. That’s where a bit of narration can be a beautiful thing. A quick scene from the guy’s point of view, full of raw emotion and compassion, turns us on even more than his perfect fictional physique.

5. It’s fiction. If someone’s heart is broken, it’s not yours. If there’s an infuriating fight, you’re not the one who has to give or accept an apology. The best part of romance in books is that it isn’t real. We can vicariously enjoy the best parts and be very glad it’s only fictional characters enduring the worst.

Keep that in mind when the heat factor of your favorite fictional love scene makes your real love life seem pathetic! 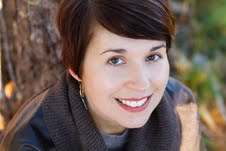 Lauren Grimley lives in central Massachusetts where she grew up, but her heart is on the beaches of Cape Cod where she spends as much of her time as possible. After graduating from Boston University she became a middle school English teacher. She now balances writing, reading, and correcting, all with a cat on her lap and a glass of red wine close by.

Unforeseen, the first novel in the Alex Crocker Seer series, was Lauren’s debut novel, and she’s thrilled to be continuing the series with Unveiled. To learn more about her or her writing or to connect with her online visit her website at www.laurengrimley.com

Teaser:
Alex was quite sure gifted was a term delusional parents applied to their strictly average children, vampires were gorgeous dead guys in her eighth-grade girls' novels, and Seers was a middle schooler's misspelling of a department store known for power tools.  Teachers, however, don't know everything–it’s Alex’s turn to be educated.

Running alone the night before school ends, Alex is violently attacked.  Regaining consciousness, she finds herself in the home of the Rectinatti Regan, the leader of one of two covens of vampires battling nightly on the streets of her city.  If that discovery wasn't enough to make her think she'd gone insane, she realizes she's sensing the emotions of another of the vampires as strongly as she feels her own.  Discovering these creatures have the answers to what she is and why she was attacked, she decides she wants to stay, despite knowing it is a dangerous, possibly deadly desire.

a Rafflecopter giveaway
Posted by Nicole Zoltack at 7:05 AM

Great post, and the reasons I love romance. Of course it is a let down when your husband doesn't quite live up to fiction. Like they can have sex several times a night (or in an hour). Hmmm. On second thought. Maybe it's just as well fiction is just fiction.

(ps none of the pictures are showing up).

Thanks for hosting me, Nicole! And thanks, Stina, for commenting - glad you liked it!

If someone's heart is broken it's not yours - funny!
And hey, no bald spots or big guts here. No six-pack either, but I try.

Great post, Lauren. Awesome that you found you were good at writing romance. And wouldn't it be awesome if romance was like this in real life? Good luck with your book.

And BTW Nicole, I featured you on my site today! http://bev-thebevelededge.blogspot.com/2013/07/its-blogger-book-fair.html

I'm sad to say that this is all so true! Makes me wish I was a fictional character sometimes...

Don't forget those multiple orgasms. Every time. Even against her will.