Everyone, let's welcome Shawna back to my blog. She's hear to talk about her latest book, Orphaned Hearts:

Religion that God our Father accepts as pure and faultless is this: to look after orphans and widows in their distress and to keep oneself from being polluted by the world. James 1:27 NIV
Orphaned Heart is my latest release. It's a wonderful little story set in Northwestern Arkansas, during 1932.
The story is about a minister, David Langley, and his search for a home for Caleb, an orphaned child with a missing arm. David is especially concerned with Caleb's situation because David knows that Caleb's disability will affect how people see him. David, who also grew up orphaned, was severely burned in the fire that killed his family. As an adult he is able to hide these scars beneath his clothes, but he always felt that his disfigurement was the reason he was never taken in by a family when he was a child. For these same reasons, he believes he'll never have one of his own as a man. So, in a way, finding a home for Caleb proves there's still hope for him.
Sadie, the town spinster, has been in love with David for years, but she doesn't think he can see past her label. Circumstances bring Caleb into her home on a temporary basis and her love for the boy blossoms, healing his pain and hers. But things become desperate when they learn of danger at the orphanage and that Caleb must soon return. David and Sadie team up, both working to find a permanent, loving home where Caleb will be safe, but while searching they discover a family instead.
Orphaned Hearts isn't my grandparents' story, but it was written because of them. My grandfather grew up in the orphanage I based the one in this story upon, and some of the details of his experiences there are woven into the story's pages. My great-grandfather was hired to work the orphanage's dairy during The Great Depression, bringing his young family with him to Arkansas. That is how my grandparents met.
My grandparents served as foster parents for many years and I have often wondered how many lives they affected. At my granddad's funeral, I sat in the pew marveling at the fullness of his life, but also thinking how unfair it was for him to have been orphaned as a young boy. Then I remembered a story my grandmother told me of a young girl who came to live with them through Child Welfare.
She was pregnant and cast from her house. My grandmother had been told that she would be a problem, but that wasn't the case at all. She was sweet, appreciative, and longing. For a few short months she got to experience a home -- a real, loving home. She decided that's what she wanted for her child and gave her baby up for adoption. The girl left not long after her baby's birth and my grandparents moved from the area. Life went on.
Many years later my grandmother ran into an old friend who went to church with the family who had adopted that baby. She learned that the little girl had grown into a lovely young Christian woman. She was smart, attending a university and had a bright future ahead. I can't help but wonder; had my granddad not been an orphan, had that compassion for hurting children not been embedded deep within my grandparents' hearts, what would have happened to that little girl, and so many of the others they took into their home.
To Nonnie and Papa.
Your story inspired mine. 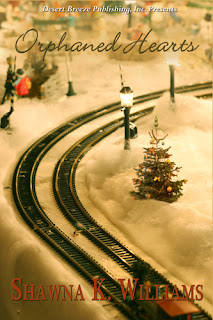 Here's a short excerpt:
David ran back to the bench and removed his suit jacket. Sadie raised her brow. In the five years she'd known him, he'd never been without a coat and tie. A little peculiar -- yes -- however, he did take his position as a minister seriously. Perhaps Caleb was also helping David to realize that ministers could take time off for fun.
"Join us," David said.
"Join you?" Sadie looked down at her 'too full to be fashionable' skirt and then at her gloved hands. No telling how much flour was caked beneath her nails.
"But I'm--"
"You are the same girl who ran around in overalls, hoping to be a miner someday?"
She glanced up and noted David's challenging smirk. Suddenly the ball hit her in the shin. Caleb broke out into a fit of laughter.
With her youthful, tomboyish spirit revived, Sadie narrowed her eyes, shooting Caleb and then David an 'I'll-show-you' look. As an only child she'd fulfilled the roles of both daughter and son. Neither David nor Caleb had any idea just what she was capable of. If she was still capable?
Sadie picked up the ball and stepped away from the bench. She carefully set it on the ground and took two long steps back. She glanced at the ball, then -- squinting her eyes -- looked through the rays of sunlight streaming through the trees, off into the horizon and imagined the ball flying into the distant mountains.
Furrowing her brow in concentration, Sadie fixed her gaze on the ball, lifted her skirt to her knees and took in a deep breath. Then she rushed toward her target, slinging her right foot back and propelling it forward. It connected in a loud thud. She watched as the ball flew higher and higher, threading between the trees and disappearing from sight.
Sadie dropped her skirt and heaved a satisfied sigh as she dusted her hands. Both David and Caleb stood frozen with their mouths gaping wide.
"Wow!" Caleb gawked and took off running in search of the ball -- which may very well have rolled down the base of the hill. She hadn't considered that. Suddenly her mothering instinct kicked in. "Caleb, wait. There could be snakes."
Shaking his head, David chuckled. "I'll go with him." The spring in his jog showed of amusement more than worry.
Sadie smiled as she watched David close the distance. A euphoric sensation surged through her, and some strange power beckoned her feet to take flight.
Not just her feet. Her heart.
What a wonderful excerpt, Shawna! Thanks for dropping by. Shawn's website is here and her blog is here. The link to purchase Orphaned Hearts is here.
And if any authors would like to contact me about a guest blog spot or an interview, just email me. Nicole.Zoltack@gmail.com
Posted by Nicole Zoltack at 7:30 AM

Wow, great story behind the story.

Hi, Nicole! It's always a pleasure to visit your blog. Thank you for hosting me today!

I just wanted to add that Orphaned Hearts is on sale for $3.99 at both Amazon Kindle and B&N Nookbooks.

What a great story of your grandparents and that they were able to change young lives just by providing a christian home and love to these children.
I love your book and have on my wish list.
Good luck with your future writing but I don't think you need luck since you have God behind you all the way.

I liked the excerpt.

What an amazing story behind the novel!

It's really wonderful you have been able to incorporate some of your family history into your writing. This novel must be so dear to your heart.

I love this story. I need to read the book.