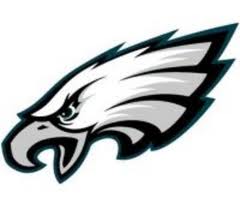 I'm a huge Philadelphia Eagles fan. My husband, unfortunately, is a huge Dallas Cowboys fan. We HATE each other’s teams. Hate hate hate. If you don’t watch sports, it might be hard to understand just how much hate we feel.
The Eagles have a fight song. I love it, hubby thinks it’s corny, but I say he’s just jealous because the cowboys don’t have one.
Anyhow, I sang son #1 lots of songs when he was in the womb, including the Eagles fight song. So he had no choice but to be an Eagles fan. He is, btw. He loves to hand me his Eagles outfits, he’ll point to their logo and say “eagle eagle eagle,” he’ll clap and cheer with me when they score. I’ve been trying to get him to spell E-A-G-L-E-S.
I have many Eagles hats, one of which has the word Eagle on it but no emblem. I pointed at the letters so son #1 could read them to me.
Instead, he said “eagle,”
Yep, the first word he ever read is “eagle.” (who needs the ‘s’?)
Don’t understand why hubby wasn’t as thrilled as I was. 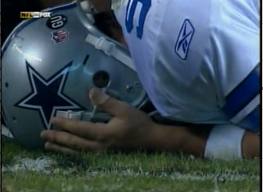 I've never cared much for the Cowboys. I do love the city Philadelphia, but I'm a Steelers fan. I just love #43 Troy Polamalu. My mom's an Eagles fan, though. :)

Haha! Aren't you clever? I'm sure your husband was thrilled... not.

I'm not really into sports on this side of the Atlantic. Thankfully, neither is my husband. Instead we just argue over politics. I think I'd prefer sports!

That's cute. My hubby's lucky I'm not a sports fan. Our kids are all Paris St. Germain fans (that's soccer- and has about two times the fanatic equivelent of our american football federation here in europe)

Not if you can get to #2 first!
And Sunday night, I hope the Eagles do a beatdown on the Cowboys.

Too funny! And hey, as long as you have one of each, it shouldn't be a problem, right? Riiiight.

I do understand. I'm 49er Faithful, hard to do this past decade, but San Francisco Giants dedicated since they moved to SF. My grandfather never saw them will, although he loved the team, my dad never saw them win when he attended a game at Candlestick, but my husband and I got to cheer them on this year.

I even verbally attacked a Rangers fan in a Macy's department store who said the World Series outcome was a fluke, reminding her of how quickly the Giants disposed of her team, especially the 9-0 game.

I am not a sports fan at all. I have never quite grasped the obsession. Hubbers makes up for my downfall, though.

So cute that your son is reading eagle. Bet Dad's teaching him how to say cowboy huh?

Ha! Different sports over here, same problems. My family's lucky--my mother moved here from Ireland, so Dad indoctrinated her quickly before she realised our team... well... they suck. Anyway, she was committed before she knew, so no arguments over the kids!

That's so funny! We're not big sports fans, except when it comes to the Superbowl. Then we're fascinated by the commercials, halftime show, and good food.

Unfortunately I can totally relate. Although I know nothing about sports, all of my brothers as well as my father are huge sports fan. From an outsider, I find if hilarious to watch them argue over teams especially during major events.