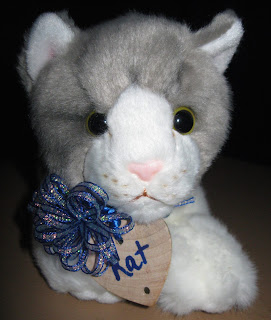 The Bluestocking Belles proudly support the Malala Fund charity. You can find out more on our website: http://bluestockingbelles.net/belles-joint-projects/the-bellesinblue-support-the-malala-fund/
Posted by Nicole Zoltack at 1:25 PM

Love the excerpt! I want Kat. So cute!

I would pick dogs as my favorite animal

If I have to choose just one animal as my favorite, it would probably be a Panda!

Now days, I like dragons the best. I wish I had one. I'd let it prowl the yard at night and protect the house.

My favorite animals are cats - any cats (small, big). I have three at home and if I could, I'd have more. And I just happen to know what I'd do with this lovely Rat - my grandkids would love to get hands on Rat the Kitty.

My favourite animals are hedgehog and dog. :)

I love dragons, and unicorns. :)

I love both of them sorry.But cats can be very independent of us, a dog really is dependent on humans.

Love both but can have dogs kids are allergic to cats. Love parakeets too. I really miss cats.
Penney

My favorite animal is the wolf

I love cats and unicorns.

cute kitty! thanks for the chance to win

My favorite animal is a panther.

Horses and big cats are my favorites.

Horses and big cats are my favorites.

There are so many animals I love: domesticated: the dog; mythical: dragons, and so many more

I enjoyed the excerpt! Congrats to the authors of Holly and Hopeful Hearts!

I know I'm way too late for the contest, but what a cute giveaway. I'm thinking this book would fit nicely on my TBR shelf.