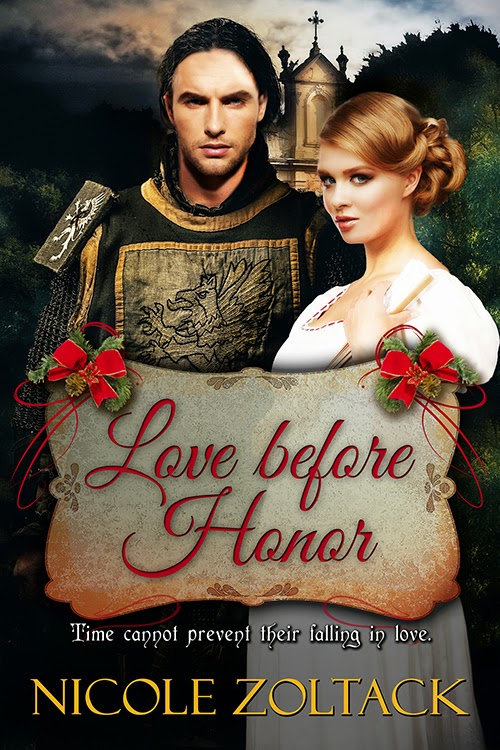 Blurb:
Honor. Truth. Loyalty. Love. All of these matter most to Sir Gerald. To avenge his love's death, he challenges her murderer to a duel. Her twin, however, feels that Alice never loved Gerald and gives him a tea. Alice had also given him teas, which enhanced his love for her, but this tea is different. This tea sends him to into the future, to the Regency era.

Lady Vanessa seeks a Christmas treat when she hears something outside the manor. Upon investigation, she sees a man dressed in armor. Unwilling to turn away a confused man with the approaching holiday, she convinces her parents to house Gerald until the new year.

Scandal has forced her parents to accept William as their daughter's best chance at marriage. Although rich, he does not understand her or her love of books and only sees her for her looks, whereas Gerald listens to her, confides in her and she him. With the approaching holiday, nothing is certain – not whether Gerald can discover a way back to his duel, whether he can move on from Alice, and not whether this Christmas will be a happy one for either Gerald or Vanessa.
Now available on ღ Amazon ღ Barnes & Noble ღ Smashwords ღ
Excerpt:
Chapter One
Honor. Truth. Loyalty. All noble. All good.

Most of the time.

Sir Gerald sharpened his blade, the clashing sound of metal on metal, the sparks flying pleasing him. He had never dueled before, but a few hours' time and that would change.
Blood pounded through him, hot and steady, a constant reminder of all he still had and all his love had lost.

"I can do that," Edwin said. Shadows from the flickering flames within the smithy covered his hand that reached toward the sword.

Gerald merely glared at his squire. Competent, yes, if a tad overeager. "I do believe I told ye several times now that your services are not required this day."

"I will not leave ye." Edwin lifted his chin. A gesture of both defiance and loyalty at the same moment.

"The blade willna sharpen more." The blacksmith picked up a hammer. Evidently some aspect in the fire told him the temperature now burned hot enough to temper new weapons.

With a great deal of reluctance, Gerald handed the fourteen-year-old his sword.

The blacksmith nodded and returned to his work.

The smithy felt like the gate to Hell, the heat immense and growing ever hotter. Still, Gerald did not move, mesmerized by the licking, greedy flames. It had been a fiery night when he first met her. Ever since, he stopped by the smithy daily, paused whenever he saw a flame, and lingered by the dying embers of his campfires.

It was she who necessitated his duel.

"Are ye certain about this?" Edwin asked.

A question the boy had asked many a time after Gerald laid down the gauntlet.

"Quite." Ever his reply. How could he not? As a knight, duty dictated his actions.

"But…" Edwin shifted his weight from side to side. Always boundless energy. His tongue never stopped wagging. It could cause him trouble down the cobbled road if never did he learn to appreciate silence.

For now, at least, Gerald would humor him. "Go on."

"Ye and she… Ye were not even promised to one another."

True, but in their hearts they were. The problem lay with that, that and jealousy.

Gerald filled his broad chest with a strong inhale. "One day, ye will understand. Honor, truth, and loyalty will only get ye so far. Love, though, it lifts ye up, alters your very outlook on life, changes your life itself. Love is all that matters."

The hammering stopped. Although the smithy was loud and prone to echo, Gerald and Edwin had long ago learned how close to be, how loud to speak to be heard despite it. The silence now prevailing in the smithy unnerved Gerald far more than the prospect of dying that late afternoon.

Almis the blacksmith grunted. "Love be not so grand. Love be trouble." His dark eyes fixed on Gerald. "Love be death."

"Death is release," Gerald countered. Perhaps death would be best. Not that Victor would grant him a merciful one.

"Sir Gerald will not fall."

Edwin's confidence lifted a small smile to Gerald's lips. "Is my armor ready?"

The red-haired boy jumped up. "A-almost!" He scampered away, out of the smithy faster than a hare chasing its supper.

The redness of the flames only served to remind Gerald of blood, and he turned away, for once finding no comfort here, wishing for mead to swallow instead of his sorrows.

The dings and clangs resumed, its steady beat almost matching his steady heartbeat. No matter what the outcome, he would do all he could. She, and her memory, deserved that much.

She who never should have felt the sharp end of a blade. She who never stepped near such a place as this. With its burning stove and already forged weapons hanging on the walls, the smithy proved as dangerous as any duel ground. Mayhap a second weapon would not be remiss. Bow and arrows would be less than worthless. A spear or lance, though...
Posted by Nicole Zoltack at 7:05 AM

Great excerpt. Thanks for sharing! I really like the cover of this one. You are on a role, girl.

Nice blurb. Sounds like a delightful dose of revenge, sadness and excitment.