I hadn't posted the link for yesterday's Champion of Valor blog tour so here it is, over at Steena's. Be sure to check it out for a medieval recipe and a chocolate one. 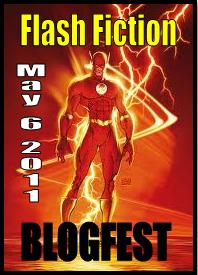 Cherie Reich's The Flash Fiction Blogfest is today! And before you think that I'm forgetting to post today's blog tour stop, I'm not. I thought that I would stay here today, and use the contest as my stop.
For my piece, I wrote a scene from during the events of Woman of Honor, told from Prince Caelan's POV. For those who don't know the series, Aislinn is a young girl who convinces the king to allow her to train to be a knight. Adamina, a commoner, also wishes to train. The two girls don't much care for each other.


Young prince Caelan entered the barracks. He grabbed a dagger from the nearest weapon rack and practiced with it, the feel of the weapon, the thrusts and jabs released some of his tension. A soft sound alerted him to another's presence, and he circled the racks of weapons until he found the source — Adamina.
The commoner played with a short sword, her forefinger testing the sharpness. Some blood dripped, but she paid it no heed. "'ello, prince," she said dryly, not bothering to look up at him.
"Good morrow," he said warily.
She rewarded him with a wry smile. "Would make a lazy spy if I can't see out the corners of me eyes, I would."
He smirked but said nothing, his gaze trained on her and her careless disregard for the deadly weapon in her hand that she flipped in the air and caught.
Her eyes finally turned to him."Surprised you didn't seek me out sooner. Dontcha like to know all the pages and squires for when they're your knights? That's what I was told." With a yank of the dagger, she ripped a stray thread free from her sleeve and dropped it.
"I do," he said, surprised that the others had realized this about him. He was friends with most of the pages, and the squires respected him despite their age difference. "Tell me about yourself," he demanded.
Her eyes narrowed. Despite her common background, Adamina had a rough time with authority, Caelan had already learned from their classes. "I wanna be a spy."
He rolled his eyes. Leaning against the stone wall, he fingered his dagger's hilt. "Tell me something I didn't already know."
She made a show of returning the short sword to its rightful place on the metal rack behind her. After a short pause, she said, "I like it here. Living at the castle, I mean. Back home, it was cold and hardly any food…." She shrugged. "But I don't have to worry about that here."
An ache in Caelan's chest began to grow. His people, he already thought of the Arnhemians as his people, some of them lacked necessary food and shelter. He knew his father helped where and when he could but obviously it wasn't enough. And it was something that Caelan would have to worry about too, when he became king.
Adamina glared at him. "That private enough for your liking?" she snapped. "I almost wasn't surprised you didn't seek me out. Since you spend so much time with her." The bitterness in her voice mirrored the bitterness in Aislinn's when she spoke of the other girl trainee.
"I am not friends with her. Geoffrey is."
She snorted. "Well, she doesn't know how to swim yet, does she? You might want to tell her to start learning how to." Adamina gave him a dark, grim smile. "Some of the boys have been talking about her needing to cool off."
Caelan gaped at the girl as she slinked from the room.
I hope you enjoyed it!
Be sure to leave a comment to be entered to win some signed post cards and magnets. Each comment during the Champion of Valor Blog Tour gives you an entry for the grand prize: a copy of the entire Kingdom of Arnhem trilogy - Woman of Honor, Knight of Glory, and Champion of Valor.
Posted by Nicole Zoltack at 7:30 AM

Nice tease! I'm definitely getting a sense for these girls' rivalry even without having them both on stage or being in Adamina's mind. I also like the effect of them toying with weapons while they spar with words.
- Sophia.

I do like the fire in that girl. Lots of emotion in your little teaser, too!

I like the dialogue between the two you pulled that off quite well. Thanks for posting.

Thank you for entering! I'll announce the finalists on Monday on my blog, and I'll drop back by here and give you a comment on your entry then as well.

I like Adamina's sassy attitude! I guess she'll need it to become a knight. :)

I think she should be king.

There's some nice interaction here, and it sounds like the rest of it would be well worth reading.

Love it! Lots of emotion and tease that had me hooked from Word One! I really like the name Adamina. Nice job!

That was a great excerpt. You get a feel for the book and the two girls.
Sue B
katsrus(at)gmail(dot)com

Such spunk! Your entry left me wanting to read more.

Nicole, I loved the scene since I read Woman of Honor. It still feels like it is part of a larger piece and not a flash piece into itself. I loved the added details of the Arnhem world. I think it is great to see this other side of the story. Poor Adamina. I'm still sad over what happened to her. She was just misunderstood.

I like her parting remark. This is pretty good, teasing and funny.