This blog is a part of The Great Blogging Experiment, the brain child of awesome blogger, Elana Johnson.

As writers, we all strive to make our characters compelling. After all, who wants to read a story about a boring character? Not me. I'd rather catch up on sleep. ZZZZzzzz.....

Where was I? Right, compelling characters. So what makes a character compelling?

Backstory. A compelling character has to have a reason for being the way they are. In my assassin story, the main character is an assassin because she witnessed her father's murder. There's a reason why she has such a horrible profession. It also gives the reader to somewhat empathize with her.

Strengths and Weakness. A character should have some great traits and some flaws. After all, no one is perfect. Hubby and I recently watched the entire series of Lost so I'll borrow some characters from the show to illustrate my point. 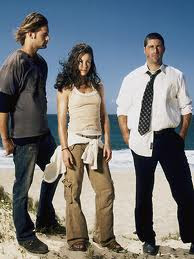 Jack Shephard: A man of science, a brilliant spinal surgeon, stands by what is right even to the point of telling the board of medicine that his father was abusing alcohol. Those are his strengths. His weaknesses lie with his not wanting to be a leader, his obsessive personality, and his overriding drive to fix things.

James Ford / Sawyer: Sawyer doesn't have many strengths until he undergoes growth throughout the show. He manages to fall in love. He can be kind (when he wants to be). In his own way, he's also a leader. But he's also selfish, macho, and a con man.

Kate Austen: Resourceful, quick-witted, and willing to do anything to save her friends, Kate also killed a lot of people before Oceanic 815 crashed on the island.

Drive. Compelling characters need a problem to overcome. Something has to happen to them in the story, stakes must be laid out. You could take notes from Jack on this, although he did have to be kicked a few times in order to get into gear.

Growth. As the characters try to fix the problem, they needed to develop and grow. The characters can't be static or flat. They need to be well-rounded and multi-dimensional. Sawyer is the perfect character to examine for this.

Quirks. It's okay for your characters to have a little quirk. It makes them more real. But quirks alone don't make for compelling characters.

Nobody's perfect. No one wants to read about perfect people with perfect lives. Give your story plenty of conflict and have your characters react realistically according to their code of ethics and morals.

People read stories to be able to fall in love with the hero, to pretend to be the heroine. Make your characters believable and realistic, strong and brave, and your compelling characters will practically turn the pages themselves.
Posted by Nicole Zoltack at 1:22 AM

Oh, I love a flawed character. I just saw the movie The Town tonight, starring Ben Affleck. Surprisingly, the movie was pretty great ~ and a really excellent lesson on good storytelling. Ben's character is NOT a good guy, but he wants to be. He's done bad things, even been given chances to "break free" of the crappy life he lives, and he still made bad choices. But in the end, finally, when the chips are down, he manages to do the right thing. He was terribly flawed, but all the more compelling because of it.

Anyway sorry for going on! Great job on this Nicole!

True. Flaws and imperfections in a character make the character much stronger as whole, since it's much more realistic and believable that way.

I love creating backstories of characters. Piecing together their history, culminating it all into the present person I'm trying to write about.

I agree with all of your points! I love a flawed character. Perfection is so overrated. Well said!

OOh I like that you used the LOST characters (I miss them so *sniff*).

Your last paragraph sums it up perfectly for me!

Haha, love that you brought in Lost characters--such good examples! Yay for characters having weaknesses! That makes me them so much more real. Thanks for the advice!

Love your list! Great points and also your analysis on the Lost characters. Nicely done!

Also, your blog is so pretty.

Have a wonderful weekend,
Lola

Love that you used characters from LOST to illustrate your points. Great post!

I'm all about quirkiness! Without it I don't relate with the character at all, you want to make sure they are intriguing enough to make you wanna stick around. What are they hiding from the reader, and when will they find out.

Great break down. I must revisit my MC and see if she ticks all your boxes. Thanks Nicole.

Flawed characters, FTW! And I love how you said they have to have drive. They have to want something, do something, feel something. I think sometimes, when I'm sitting home on my couch, doing nothing, that those are my best reading moments. I read about someone who DOES something, and I want to do something too.

I love quirky characters. They stand out in your imagination. And I agree with drive/growth - even the most amazing character is boring if they don't want or need something!

I've come to the conclusion that we are all just really, really, smart writers because the common threads I am reading are tieing us all together like a braided rope. How can that many of us be wrong?

I think all the points you made are important. The examples were helpful too.

Lost really did have great characters full of dimension, depth, quirkiness, ethics, darkness, heart and heat...I wasn't keen on the writing the last year, but I still loved the characters....

Quirks are so fun! Really brings a character to life. Great list! :D

Lost is a great example for compelling--really messed up--characters. LOL. This is a wonderful post. Drive is really important and it think it's label is self-explanatory. I agree with you on quirks, too. I love to give my characters little tidbits that are memorable but don't necessarily 'make them'.

I can't believe I've been running into you all over YALitChat and yet have come to visit your blog. It's great. I'm following you now. Enjoy your weekend.

Great points. I especially agree with the need for growth, and that no one is perfect. :)

If we nail it.... our characters really will turn the pages for our readers.

It's true, watching your character grow, is great!! Nice post Nicole. And I love your backround. Beautiful.

Great examples! Drive is a great one ;o) I can't stand when the characters are too perfect! Great point ;o)

"...can't be static or flat". Now, isn't that the truth! Growth out of drive is so important.

This blogfest is sooo fun... I love seeing all these different approaches. Great idea to use the LOST characters, which many of us are familiar with!

From one fantasy writer to the other. Excellent post.
Nancy
N. R. Williams, fantasy author

omg, I love Lost!! And your descriptions of them are spot on!! Great tips!

My favorite character on Lost was Sawyer- I loved him and hated him at the same time. But then, I often like the bad guys best.

Great tips! I agree, flawed characters are key. Gives us more to work with too. :)

Wise words. The flat character is the predictable one who will not change. I love my characters full of believable quirks and a determination to learn and to overcome.

Such a great breakdown for compelling characters, Nicole! It's all about authenticity, isn't it? Great points all around.

Wonderful way to break down the topic. You are right on point, and I loved your examples.

I've heard that every scene needs to have the characters motivation and it's hard to know that unless they have a backstory.

Drive. It's all well and good for a character to stumble through life, but why would I want to read about it. It is the character that does something, cares about something that carries us away... Thanks for your post. Love your blog!

Great points! I especially like the points on flaws, growth, and that the character needs something to drive them. :)

Great examples! I love your point on quirks. They're definitely worth putting in, but a writer can't rely on them for full characterization as a crutch. Characters need more--all the other things you talked about.

Absolutely agree. A character without flaws is a bore. First of all, none of us is perfect. And second, how can a character grow if s/he has no flaws? Also agree that needs and wants are crucial. Why would a reader root for a character who doesn't want anything? Fabulous list!

I enjoyed your post. Your points were well made. Now I want to see what you will do with the most boring person in the world using these suggestions.

Lee
Tossing It Out

Flaws can make a character endearing, can't they? Much more so than perfection. (I think it's a jealousy thing;0)

Creating a good backstory and identifying the characters’ strengths and weaknesses really are the key. Thanks for stopping by my blog!

"quirks along don't make for compelling characters." This is excellent advice.

Great post! Totally agree with you about "perfect" characters -- they're so annoying, lol, but what's more important, they're not believable.

It's been great seeing everyone's take on Elana's challenge. Lots of common thinking, but everyone says it a little differently. :)

your character is an assassin? I'm hooked already. Great analysis. Even though I'm like the only person in America who hasn't seen Lost.

I didn't watch LOST, but I still love your examples. And yes, the character doesn't just need to have a goal/objective; they also have to be driven to achieve it. Great post!