Great News and a Giveaway!

But that's not even the great news - Woman of Honor will be available for print at Desert Breeze sometime in 2012! Details as soon as I learn them.

I'm so excited so I want to have a giveaway. One winner will receive an ecopy of Woman of Honor. Just leave a comment to enter. 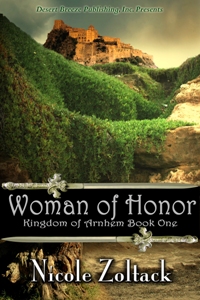 Aislinn of Bairbhe dreams of becoming a lady knight to honor the death of her fallen brother. To her mother's horror, King Patrick grants Aislinn's wish and she begins her long years of training.

Despite the mockery of the other pages, and the disdain of Prince Caelan who also trains to be a knight, Aislinn commits herself to her dreams and embarks on a journey of self-discovery and bravery. Through the years, Aislinn and Caelan grow from sparring classmates to good friends. They both know that someday Caelan will marry for the sake of the kingdom, but even that cannot keep them from falling in love.

The threat of war with the Speicans is a constant threat, and one that grows more frightening as she and Caelan train toward their eventual knighthood. Aislinn has committed herself to serving Arnhem, and has promised herself as King's Champion when Caelan claims the throne. She is willing to give up everything... her childhood, her life, even her heart for Arnhem. No matter the pain it brings.
Posted by Nicole Zoltack at 10:48 AM

I already have the book, so no need to enter me for the ecopy, but that's fantastic news! Yay!!

Great job with the flash pieces too!

Good for you, Nicole!! Awesome on both counts!

Congratulations! I love this genre. Knights and kings really capture my imagination. Great cover too!

Oh, this looks great. Very excited as this is just my kind of book!

The book has such a beautiful cover. Whoever wins the free ecopy shall be lucky.

CONGRATULATIONS. So excited for you. How long has Woman of Honor taken to get to this point?

Joanna - Woman of Honor started as a NaNo novel, I wrote the first 50K in November of 2007. Then it sat for awhile until I learned about Desert Breeze Publishing during a publisher chat on a yahoo group. I chatted with Gail, the EIC, who said she was looking for a fantasy romance series. I mentioned Woman of Honor and she said that when I finished it, to submit it. I worked hard on finishing it, submitted it, Gail accepted it and it has been published in ebook format since April of 2009. Now that DBP is growing and to celebrate 3 years of publishing, select titles are going to be available in print, including Woman of Honor. It's taken a long time to get to this point but I'm so happy!

Congrats on all your good new! Exciting stuff.

Congrats, that's so exciting! And I love the idea of Aislinn being a knight! I've never heard of a woman being a knight before. The cover looks fantastic!

Congrats to you and may good news keep coming!
musicalfrog at comcast dot net

Yaayyyyy! I'm so excited for you, Nicole! That's fantastic news! :-)

I bet you thought you must have heard wrong or read wrong when you heard the news. Thats what i do/ Congrats!!!!! I bet your still glowing. Thanks for the giveaway. Joannie jscddmj[at]aol[dot]com