Welcome to the Second Stop of the Belles Holiday Wassailing Tour

A warm and merry welcome to you! The Baron and Baroness Welles their daughters Jean and her husband and Eliza and her betrothed Stephen of JOY TO THE WORLD could not be happier to invite you into their humble abode. Things had been a little unnerving when Stephen, the Duke of Wyndale, had showed up late to his wedding with Eliza, a wedding which has now been postponed. Hopefully there will be no further complications with their next wedding.

To win a signed, print copy of The Test of Time with swag, comment below with your favorite holiday cookie and the answer to be found at the previous stop on the tour, Jude Knight's blog.

What is the title of Jude Knight's contribution to Mistletoe, Marriage, and Mayhem?

Eliza, Stephen, Jean, and Lord and Lady Welles are characters in Joy to the World, in Mistletoe, Marriage, and Mayhem

Eliza Berkeley enjoys going for walks and playing on her pianoforte. As the second daughter of a baron, she never expects a duke to look her way. When one does, and proposes, she immediately accepts, never suspecting that she might be taken by a reprobate …

Stephen Huntington, Duke of Wyndale, enjoys drinking, gaming, and wenching. He loves the ladies, and they love him. Settling down is not in his future… until he learns that he is to be wed on the morrow to a woman he has never met.

Stephen made his way to Eliza's side. She shyly glanced his way. He was clapping mightily.

"Lovely singing," he exclaimed. "Perhaps you could play on the pianoforte, Miss Berkeley?"

"Perhaps." She flushed under the heat of his gaze. "But first, would everyonel care to have wassail?"

Instructions
·       Preheat the oven to 350 degrees Fahrenheit.
·       Scoop out the core of the apples without fully penetrating the apple – a melon baller works well. Fill each apple with about a tablespoon of unrefined cane sugar. Place the apples in the baking sheet. Stud an orange with thirteen cloves and place it in the baking sheet. Bake the apples and orange together for forty minutes.
·       While the apples and orange bake, pour apple cider and brandy into a heavy-bottomed stock pot and warm over moderately low heat. Whisk in powdered ginger and grated nutmeg. Do not bring the wassail to a boil.
·       Cut a small square of the butter muslin and place allspice and cinnamon into the square; tie with 100% cotton cooking twine and float this sachet of spices in the wassail as it warms.
·       Beat egg yolks until light in color and set aside. In a separate bowl, whip egg whites until stiff peaks form. Fold egg yolks into whites, then temper the eggs by slowly pouring one-half cup wassail into the eggs. Remove the spice sachet from the wassail and pour in the tempered eggs. Transfer to a punch bowl. Float baked apples and oranges in the wassail and serve by the mug, topping each much with a small slice of toast if desired.

Excerpt from Joy to the World

It had been years since Stephen last touched a pianoforte’s keys. To his trained ears, his lack of practice was evident, so evident he almost stopped playing. Only the intent eyes of the lady beside him forced him to push through it. Eventually, his fingers cooperated, and he tempted the instrument to play something resembling music.

“Not as good as yours.” He grimaced. Failure was not something he was accustomed to, and why he had offered to play in the first place, he did not know.

She did not disagree with him. His frown only deepened, but then, he smiled. Eliza did not feel the need to agree with his every word... Was that for good or for ill?

“Who taught you to play?” Her fingers hovered above the keys. “I have not seen a male pianoforte player before.”

“Ah.” She nodded as if that explained much.

“She always wished for a daughter, but I was her only child.”

He fidgeted, suddenly uncomfortable. “Did you play for him?”

Eliza paused and tilted her head, considering. “No. There was no time for it.”

Ah, something he had over the impostor. This greatly pleased him, which, in turn, worried him.

Eliza's father clapped his hand. "Please, join us for some food and drink. I insist."

His wife nodded. "But of course. I do hope you enjoy lobster."

Stephen smiled widely. "Lobster is a great favorite of mine."

As served at the Christmas dinner of the Duke of Buckingham in 1808, with the expatriate French king, Louis XVIII
Recipe from: A Complete System of Cookery, 4th Ed., by John Simpson, Cook to the late Marquis of Buckingham.

Cut up a lobster, take the fish out, cut it in small pieces, and put it into a stewpan with a little sauce tourney, pepper and salt, and a little anchovy essence. Mix it all together, split the tail and body shell; put the lobster in, and cover it over with bread crumbs; drop clarified butter over the lobster, and put it in the oven to brown: if for meagre, use cream.

"Eliza, will you be a dear and fetch some elder wine for our guest?" her mother asked.

Eliza glanced at Stephen. "Will you help me?"

As Eliza walked past her sister, Jean gave her a wise smile. "He looks favorably upon you."

Eliza blushed and hurried to catch up to her betrothed. No one but herself and Stephen knew that the man she had been about to marry had not actually been the Duke of Wyndale. This Stephen was the true duke. And he had stepped into the impostor's shoes and agreed to marry her, if she wished, to save her name and her family from scandal.

Lately, though, she could not help but wonder what it would be like to marry him for him and not for the sake of her family... Although what Stephen would think of that, she surely did not know.

https://janeaustensworld.wordpress.com/category/regency-drink/
Recipe from: A New System of Domestic Cookery: Founded up Principles of Economy; and Adapted to the Use of Private Families, by Mrs. Maria Eliza Ketelby Rundell

To every quart of berries put two quarts of water, boil half an hour, run the liquor, and break the fruit through a hair sieve; then to every quart of juice put three quarters of a pound of Lisbon sugar, coarse but not the very coarsest. Boil the whole a quarter of an hour with some Jamaica peppers, gingers, and a few cloves. Pour it into a tub, and when of a proper warmth, into the barrel, with toast and yeast to work, which there is more difficulty to make it do than most other liquors. When it ceases to hiss, put a quart of brandy to eight gallons, and stop up. Bottle in the spring or at Christmas. The liquor must be in a warm place to make it work. 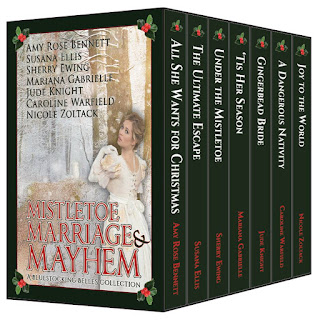 In this collection of novellas, the Bluestocking Belles bring you seven runaway Regency brides resisting and romancing their holiday heroes under the mistletoe. Whether scampering away or dashing toward their destinies, avoiding a rogue or chasing after a scoundrel, these ladies and their gentlemen leave miles of mayhem behind them on the slippery road to a happy-ever-after.

***All proceeds benefit the Malala Fund.***

Eliza waved with her family as they saw you off with directions to the next stop. "Do take care and Merry Christmas!" she called.

Make sure you visit all of the Belles' holiday wassailing stops, with a different Regency era Christmas carol, dinner selection, and beverage, and wassail recipes at every stop that you can make in the modern kitchen.

I really love this story, Nicole. The recipe sounds really good. I can taste the sweetness now. LOL
Jude's contribution in Mistletoe, Marriage and Mayhem is Gingerbread Bride. I really like it too.

You Bluestocking Belles write many awesome story. I can't finish it fast enough.

My Mom's homemade sugar cookies with powdered sugar icing - they would melt in your mouth!

For Christmas, I make thumbprint cookies with caramel in the center sprinkled with a little sea salt. It's really good.-Aleen

My fave holiday cookie? Alas, I don't have one. I have no sweet tooth. And back when I did---well, same answer. I loved 'em all!

Ah, so that's what is in a traditional wassail. I've heard of it and sang a lot about it in choir, but I didn't quite know everything in it. Congrats to you and all the authors in Mistletoe, Marriage, and Mayhem!

Hi Nicole - this was a great fun read - loved it .. and I'll keep it up to read through again ... the stories look amazing too - that period always looks so rosy from the upper class levels - and delights us with all things.

Jude's contribution is Gingerbread Bride. My favourite Christmas cookie is shortbread of course.

Jude's story is The Gingerbread Bride. I don't really have a favorite but I do like very much sugar cookies with icing and shortbread cookies at the holidays. I am enjoying this holiday tour very much.

Just found you today! My favorite holiday cookies are frosted sugar cookies! Jude's story is called Gingerbread Bride. Happy holidays and thanks for the chance to win!!

My favorite holiday cookies are butter cookies, the ones that come in a blue tin can. The title of Judith Knight's contribution to Mistletoe, Marriage, and Mayhem is Gingerbread Bride.

Jude Knight's book is Gingerbread Bride in the anthology