Creating an urban fantasy world can be extremely fun. There are so many paths and possibilities. Granted, a lot of this information will probably not be included in the book, but it will be in your mind as you write your story.  Sometimes the process of creating the world changes or expands the story.  Here are the three concepts I believe all authors should consider when they create their world.
1- EVOLUTION
Whether you have made a new species or not, I believe it is important to think about how your species developed. One example of this is vampires. How did your vampires come to be?  This popular species offers a wealth of potential that an author can use or revise. Some authors have utilized Christianity to explain their vampires’ existence by saying that the species is Cain and Lilith’s children. Other’s have explained the species through magic.
In my book Fire Baptized, vampires were formed when demons bit humans and infected them with a virus. This is one of the many reasons why humans have forced supernaturals to live in caged cities. Additionally every species in my world has their own story of evolution. My fairies created shapeshifters by experimenting with human and animal genes. My pixies began as small magical organisms within the fairy realm that was accidentally transported by several trolls. Most of this information is not in the story, but these details formed the plot and characters.
2- LANGUAGE
Obviously, your characters will speak English, but are there different dialects? If you have many magical creatures do they all speak English? Consider assigning your species foreign languages. Perhaps, the werewolves in your story are all from Spain, and the elves are from South Africa.  Furthermore, you can invent a language or dialect for certain groups. Maybe your mermaids put the verb at the end of the sentence, when they talk. I believe an author should have fun with this and push the limits of their imagination. However, the new language should be close enough to English so that the reader can understand what the characters are saying.
In Fire Baptized, there are a group of shapeshifters called Rebels. They are revolutionaries that protest the humans for putting them in caged cities. They have chosen to reject everything that is similar to human culture; therefore they established their own dialect, coined Lib Lib. Instead of “I”, they say “me.”  There are a lot of other differences between Lib Lib and English. In order for the reader to understand what the Rebel characters are saying, I have another character present in the scene that is not familiar with the dialect and requires a translation. This way, the reader knows what is happening within the story.
3- CULTURE
Every magical group within your world should have their own beliefs, values, religions, arts, etc. You can create your own culture for each species or you can use the many cultures that exist or have existed within our world.
Most of my supernatural groups’ beliefs and values are based on Afro-Cuban culture which is a combination of African and other cultural elements found in Cuban society. The caged city that my supernaturals live in is called Santeria. The Santeria religion originated in West Africa and was imported to the Caribbean by African slaves that later merged many of the beliefs with Christianity. This religion is practiced in Cuba, Puerto Rico, Columbia, and so on.
I spent several months researching the religion and used what I learned to created Fire Baptized’s world. My entire caged city is divided into five districts. Each district is themed after a Santeria god or goddess’s colors, powers, and animals. Throughout the book, my characters are involved with festivals that are traditionally celebrated by Santeria practitioners. Additionally, my mystery plot was derived from the religion.
In conclusion, authors should push the limits of reality during the world building process. Taking the time to consider your characters’ evolution, languages, and cultures is what will separate a well-imagined story from another one riddled with cliché and seen before settings.
Here’s a mini excerpt of Fire Baptized displaying how I used the Afro-Cuban culture to create my world.
The rush of wind lessened to a breeze. I opened my eyes and peeked over his shoulder as we turned out of Shango District. The habitat was divided into five districts. Each district was named and themed after a popular Santeria god. I lived in Shango’s flaming orange district. Zulu lived in Yemaya.
We entered the sapphire gates of Yemaya. A life-size statue of the goddess stood near the entrance, carved from spelled ice that could not melt. It shimmered in the moonlight, giving the effect of wavering liquid. Blue and white flowers lounged at her sandaled feet.
Even though it was in the middle of the night, Supernaturals kneeled in front of her, chanting. Their voices rose above the jeweled gates. Teal silk robes covered them. Cowrie shells, dyed in blue ink, draped around their necks. Gone was Shango District’s smell of death and blood, poverty and depression. The soothing scent of the sea hovered in the air and seized me, stirring up memories of Orisha beach during the summer, salt on my tongue, sand between my toes, and the calming waves of the ocean pushing me forward.
I sighed.
“You’re lucky to live here,” I whispered. Zulu’s body tensed under my arms.
“Luck has nothing to do with it," he said as we stopped at a light. "It’s a way for my mom to pay me off. To make sure I don’t call her Mommy in front of her Pureblood friends.”

Since the 1970’s humans have forced supernaturals to live in caged cities. Silver brands embedded in their foreheads identify them by species: a full moon for Vampires, a crescent moon for Shifters, a pair of wings for Fairies, and the list goes on, for each supernatural species has been tagged and categorized by humans.
Lanore Vesta is marked with a silver X, the brand of Mixbreeds, second-class citizens shunned by society. She stays to herself, revealing her ability to create fire only during emergencies. All she wants to do is graduate college and stop having to steal to survive. But when she stumbles upon a murder in progress, she catches the attention of a supernatural killer. Now all she wants is to stop finding dead bodies in her apartment.
Enlisting help from her Were-cheetah ex-boyfriend Meshach and a new mysterious friend named Zulu, she is steered through the habitat’s raunchy nightlife. But their presence sometimes proves to be more burden than help, as they fight for her attention.
While the corpses pile up, and the scent of blood fills the air, Lanore is left wondering: will she find the psycho or die trying?
--- 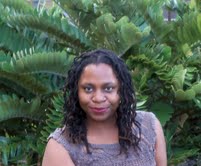 Kenya Wright always knew she would be famous since the ripe old age of six when she sung the Michael Jackson thriller song in her bathroom mirror. She has tried her hand at many things from enlisting in the Navy for six years as a Persian-Farsi linguist to being a nude model at an art university.
However, writing has been the only constant love in her life.
Now Kenya is publishing her first book, Fire Baptized, the urban fantasy novel she always wanted to read. This novel is the first book in a series.
Will she succeed? Of course.
For she has been coined The Urban Fantasy Queen, the Super Iconic Writer of this Age, The Lyrical Genius of Our Generation. Granted, these are all terms coined by her, within the private walls of her bathroom as she still sings the Michael Jackson thriller song.
Kenya Wright currently resides in Miami with her three amazing, overactive children, a supportive, gorgeous husband, and three cool black cats that refuse to stop sleeping on Kenya’s head at night.
Website
Book Video
---
Kenya will be giving away a $10 Amazon.com gift certificate to one randomly drawn commenter during the tour so be sure to leave a comment!
Posted by Nicole Zoltack at 7:05 AM

World-building is definitely a thoroughly enjoyable process for myself as well. It really enriches the prose and makes it that much more authentic for me. And I absolutely agree that authors should try to push the boundaries of reality with the nuances of their worlds.

Great tips Kenya on what to consider when developing a fantasy world. I'm just starting to develop a new world for a new project so this is really helpful.

Good luck with your book.

The world-building will make them real, even though most of it will never end up in the book.

So many fabulous posts on world-building today!! Knowing (or developing) how the types of characters you're working with came to be is so vital. Like in all writing, knowing your characters is a must.

It's so fun developing a new species or taking one already in existence and giving it a slant.

Wow! Fantastic points, Kenya - such a wealth of information here. Thanks for a great post.

Thanks so much! World Building is my most favorite part of the writing process!

Thanks all for checking out the guest post and commenting!


Thanks Nicole for hosting me!!!

When you are creating new worlds for your books, how extensive do you plot them? For instance, one author I read often has on her website, a map of the village where her fictional family lives pointing out key locations mentioned in the stories. What materials/resources do you use to keep track of everything? Some authors use Excel spreadsheets, others use white board. Do you ever include said maps in your books as a point of reference for your readers?

Have a pleasant weekend and look forward to visiting with you next week.

Kenya...I like your 3 concepts of world-building. Plus, I agree about languages...but that they can't be too far from English (unless everyone walks around with a universal translator). Even when I read novels where the characters have a heavy dialect, I get distracted. It interrupts the flow of reading.

Thank you for hosting Kenya today!

World building can be, and should be, a lot of fun. You are so right that it is a chance to push the boundaries, stretch those imagination muscles and even take something common, add a twist of history and make it your own.

You spent a lot of time on creating this world, and it shows. The quality is exceptional.

I enjoyed reading the world building concepts thank you. Well thought through.

Exploring new worlds are one of the things I enjoy about supernatural novels, so I really agree that a carefully-built fiction world is a must.