Guest Blog with Christine Fonseca - The Act of Being Fearless

The Act of Being Fearless
“Creative people, as I see them, are distinguished by the fact that they can live with anxiety, even though a high price may be paid in terms of insecurity, sensitivity, and defenselessness for the gift of the “divine madness” to borrow a term used by the classical Greeks. They do not run away from non-being, but by encountering and wrestling with it, force it to produce being. They knock on silence for an answering music; they pursue meaningless until they can force it to mean.”
~Rollo May, COURAGE TO CREATE (Ch 4, page 93)
I thought I’d talk about the act of writing fearlessly. When I was planning out this blog tour, I reached out to my closest writerly friends and asked them what I should talk about. Every one of them said I should talk about writing the dark stuff. When I asked for a little more explanation from one of my friends, she said that she felt like I was willing to “go there” in my stories and should write about that.
Hmm, “go there”. Yea, I really had no idea what that meant. I just wrote the story that wanted to be written. Nothing more.
And then I started to think about it—really think about it. Think about the process of writing, about why I am willing to “go there” as she mentioned. Think about the ways I torture my characters, forcing them—and myself—to look at the harder, darker sides of humanity. And it clicked…
It’s about having the courage to create.
Back in college, I took a lot of philosophy classes. One of them focused on two particular writers, the existential philosopher Paul Tillich, and the existential psychologist Rollo May. Tillich wrote a profound book called the Courage to Be. His student, May, rewrote the same ideals in his Courage to Create, from which the above quote was taken. Both books resonated with me as they explored what it was to face death—not physical death, but the death of stagnant ideas. The death of old ideas. The death of what is most comfortable, in search of what is most true.
Creation.
As writers, we must have courage if we are going to write the story that is meant to be written. Not the story we are being “told” to write, not the story we think will sell—but the story we are meant to write. May believed that creativity came directly from the struggle between death and our push against it. I think that is most certainly true.
But how do we muster up the courage to face down our own death, if you will, and write the story begging to be written? How do we embrace our fear and do what we must?
For me, the answer lies in the act of writing itself. Writing through my conflict, my fear, my tension—it is in that moment that the creative process occurs. Within the limits I inflict on myself is where I find my inspiration and the drive to continue through a difficult project.
When I was writing DIES IRAE, there were many moments of struggle; many times when I wasn’t certain I was telling the right story. Countless times when I struggled because of my fear that it wasn’t good enough, that the readers will hate it. I didn’t have time to wallow with my fear, though. My deadlines were coming fast and I had to get the story written, fear or not. And it was through that angst and struggle, that I found the voice of the story. My creativity sparked to life and I was able to forge something special, something unique. True, readers may not find it as special. But, for me, I had accomplished what I set out to do.
So, the next time you find yourself looking for excuses not to write, wanting to scream or throw your laptop because the words won’t come. Stop. Take a breath. And write. Anything. This is the moment of creation. The tension and anxiety, the struggle—that is what will engage your creative mind and bring you to new heights within your writing.
Don’t be satisfied with the mundane or “tried and true”.
Be daring. Be bold. Embrace chaos, death, anxiety…
And GO THERE!
I leave you with one last quote from Rollo May and The Courage to Create:
“Artists are generally soft-spoken persons who are concerned with their inner visions and images. But that is precisely what makes them feared by any coercive society. For they are the bearers of the human being’s age old capacity to be insurgent. They love to immerse themselves in chaos in order to put it into form, just as God created form out of chaos in Genesis. Forever unsatisfied with the mundane, the apathetic, the conventional, they always push on to newer worlds.”
~Rollo May, Courage to Create, page 32
---

About Christine Fonseca
School psychologist by day, critically acclaimed YA and nonfiction author by night, Christine Fonseca believes that writing is a great way to explore humanity. Her debut YA Gothic series, The Requiem Series, including DIES IRAE and LACRIMOSA, examines the role of redemption, sacrifice and love. When she’s not writing or spending time with her family, she can be sipping too many skinny vanilla lattes at her favorite coffee house or playing around on Facebook and Twitter. Catch her daily thoughts about writing and life on her blog.
Blurb for DIES IRAE

Some sacrifices should never be made—even for love.
Mikayel lives by one rule—obey the orders of the angelic Council at all costs. But when he and his friends, Azza and Demi, are sent to Earth as teenagers, following the rules is more difficult than they expected.
Being human isn’t the only problem facing the three angels. Unbeknownst to the Council, demonic activity is on the rise, threatening to break a tenuous peace that has existed for a millennia.
Caught in a struggle for power with unseen demonic forces, and fighting against his rising emotional, Mikayel must now decide how many rules he is willing to break to save his friends, a decision that could reignite an ancient war and will threaten the only thing that matters to the angels, the survival of humanity.
Author Endorcement:
“Dies Irae is the perfect introduction to Christine Fonseca’s Requiem series. The beauty of the words will tempt you, the tragedy of the story will break you, and the love, woven throughout like music through the trees, will haunt you for days afterward. Dies Irae promises a tale unlike any you’ve read before.”
~Ali Cross, Author of BECOME
Availability:
Publisher: COMPASS PRESS
ISBN:
Format: Digital format only - from Amazon, Barnes and Noble and other retailers.
Blurb for LACRIMOSA 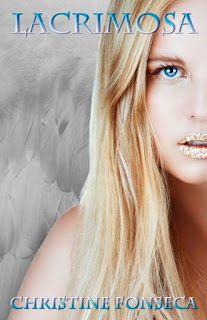 As if casting out demons isn’t hard enough, five-hundred-year-old Nesy has to masquerade as a teenage girl to do it. Nesy is the best of the warrior angels called Sentinals. She never makes mistakes, never hesitates, never gets emotionally involved. Until she meets Aydan.
He is evil incarnate; a fallen angel that feeds off the souls of others. Everything Nesy is supposed to hate.  But she can’t, because he’s also the love of her former life as a human girl—a life that ended too soon, tying her to emotions she was never supposed to feel.
Now Nesy must choose between doing her duty—damning Aydan to the fiery depths of hell—or saving him, and condemning herself.
Author Endorcement:
“LACRIMOSA reaches out, grabs readers by the heart, and takes them on an emotional journey from the first page to the last. The last novel you’ll need to read to understand true sacrifice.”
~Elana Johnson, Author of POSSESSION
Availability:
Publisher: COMPASS PRESS
ISBN: 0984786368 (ISBN 13: 9780984786367)
Hardback and Digital formats from Amazon, Barnes and Noble and fine retailers. Links not currently available.
Additional Titles in the series include LIBERA ME (Nov 2012) and REQUIEM (March 2013). The book trailer can be seen by linking to YouTube - http://www.youtube.com/watch?v=AwTQoOFKEZg
For more information about Christine Fonseca or the series, visit her website – http://christinefonseca.com or her blog http://christinefonseca.blogspot.com
Posted by Nicole Zoltack at 7:05 AM

I am so excited to finally get Christine Fonseca's book--

having the courage to create.
YES!

I'm not sure I could love this post any more. Simply beautiful.

One of the things I find is when I'm most frustrated, most despairing, that's when I'm on the brink of learning something important - about my story, my craft, myself. It's the relentless push through those times that lets me create - and the relentless need to go there that makes me do it.

Love your comments you guys. EEP!!! Thank you!

An excellent post and so interesting to read. Thank you.

Sometimes, I just feel like I'm just writing a story, nothing more. But reading these quotes make me feel kind of nice, that my creativity is something bigger than my humble little mind can really comprehend.

Naw...still feel like it's a plain old story, same story by me, told differently...I hope.

As for Dies Irae, I loved it. Can't wait for Lacrimosa.

Such great advice Christine to not give into the fear. So excited for your book's release.

And oh, I can so relate to this post. Writing takes such a large amount of courage!

Great post, Christine. And I commend you for being able to "go there." I'm not sure I have it in me to write deep, dark like that. I don't know if I'm afraid, or what. But right now my writing is pretty lighthearted.
It's awesome that you can write a variety of concepts and emotions like that.

This is such great advice, Christina! I will remember your words when I'm writing, because fear is always hovering over my heart when I open my WiP. I feel the creativity just out of reach, just past the fear. Thanks for sharing this. And thank you, Nicole, for the post. Have a great weekend!